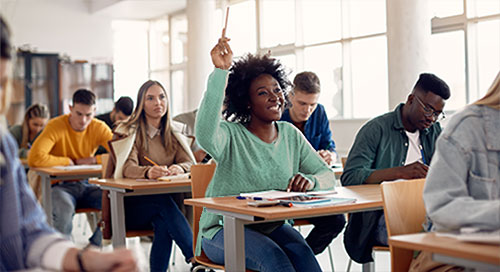 We’ve written about Social Determinants of Health (SDoH) and their impact on health before. In this series, we delve more deeply into the five main issues and their contributing factors.

As we’ll see throughout this series, social determinants are not standalone problems, but a web of interconnected issues. Substandard education can lead to unemployment which can lead to poverty, which can lead to housing instability, food insecurity and a lack of access to health care.

Education is the most significant changeable social determinant of health. Its impact reverberates throughout a student’s life. If early life conditions are poor, a chain reaction can be triggered that affects performance in school, adult opportunities and, ultimately, health and life expectancy.

A person’s first five years are the most critical in shaping the rest of their life. Interventions involving social and cognitive stimulation during these years have a much greater effect on later health and wellbeing than interventions between the ages of six to eight.

Children from poor families and areas of lower socioeconomic status (SES) are more likely to repeat grades, require special education and drop out of high school.

A high school diploma can literally reduce a person’s risk of premature death. Men and women who don’t finish high school can expect to die about five years earlier than graduates.

There are many reasons kids abandon high school. Students whose parents are not engaged in their children’s education are more likely to drop out. In low-income areas dropout rates are four times those of more affluent communities.

LGBT students often report that verbal abuse and violence contribute to their decision to leave school.

Those without college degrees have limited employment options compared to those with degrees. They are more likely to have more dangerous, lower-paying jobs.

The children of parents who did not go to college are less likely to go themselves, and the cycle continues.

Poor English language and reading skills can hinder access to healthcare and make comprehension of health information and proper medication usage difficult. These skills can be deficient in those who don’t speak English at home and those with inadequate education.

People who are not proficient in English are more likely to report lower access to care, worse health and increased depression than those who are fluent.

Education changes life trajectories. It narrows socioeconomic gaps and mitigates political inequities. And while long-established federal programs such as Head Start provide early childhood education to low-income kids, they don’t reach enough of them. Head Start helps prepare a million kids a year for school, but that’s only about 40 percent of eligible preschoolers and under 5 percent of eligible infants.

For the health of our nation, more must be done. It’s time to address education disparities with vigor. Ultimately, more lives may be saved.

This is part two in a five-part series taking a deeper look at each of the following social determinants of health:

If you’d like to find out when a new article is posted, please use the social media links at the bottom of any page on our site.