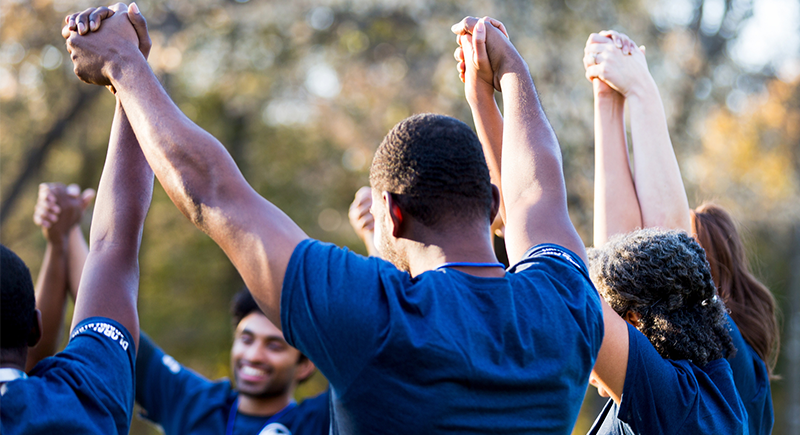 We’ve written about Social Determinants of Health (SDoH) and their impact on health before. In this series, we delve more deeply into the five main issues and their contributing factors.

As we’ve seen throughout this series, social determinants are not standalone problems, but a web of interconnected issues. Poor community support, racial/gender discrimination or incarcerated parents can cause substandard education, which can lead to poverty, which can lead to housing instability, food insecurity and a lack of access to healthcare.

Social and community context is related to neighborhood and built environment, but deals with less tangible factors than violent neighborhoods, dangerous housing or food deserts. The degree to which people feel part of a community and how active they are in that community can greatly affect their health outcomes.

Community participation includes a range of activities such as voting, group activities, volunteer work or helping in a community garden. Many such actions will include physical work that has a direct effect on a person’s health, in the same way that any exercise does. Civic participation can create a positive feedback loop—those who join in these activities build their social networks (virtual and physical) and discover more and more ways to engage in the community. It can also create a positive sense of purpose and self-worth, leading to even more social action.

Interestingly, voter participation can influence health. One international study (which included the United States) showed that voting resulted in better self-reported health, while another found that non-voters reported worse health in later years.

As we’ve seen in previous articles in this series, minority and poor communities experience negative social determinants across the board.

Oxford Languages defines discrimination as “the unjust or prejudicial treatment of different categories of people or things, especially on the grounds of race, age, or sex.”

Unsurprisingly, those on the receiving end of prejudicial treatment experience higher levels of stress than others. Stress is a factor in a wide range of dangerous chronic diseases that diminish health, both physical and mental. It causes an increase in unhealthy behaviors such as smoking and alcohol abuse, and a decrease in healthy behaviors such as diabetes management and cancer screenings.

Social cohesion is achieved when all groups (not necessarily homogonous) in a neighborhood, state or country feel a sense of community and belonging, inclusion and participation, and recognition and equity.

Studies have shown that members of cohesive societies have higher self-reported health than those from less inclusive communities.

While the intent of incarceration is to punish criminal acts, it also has a highly negative effect on health and is applied unjustly in some communities compared to others.

Race and education are strong—and strongly linked—indicators of how likely a person is to be in prison. Black and Hispanic people are more likely than others to be arrested and found guilty of offenses. In men between 18 and 64, one in 87 inmates is white, one in 36 is Hispanic and one in 12 is Black. In many cases, this can be attributed to discriminatory policing and judicial policies (such as “stop and frisk,” “three strikes” rules and mandatory sentencing) and inequalities in education, housing and wealth.

Education is a huge factor. In white men ages 20 to 34, one in 57 is jailed. In white men of the same age who did not finish high school or attain a GED, the rate is a staggering one in eight. And disparities in access to quality education have been well documented.

In addition to the obvious higher risk of being exposed to violence in prison, male and female inmates have higher rates of asthma, cancer, hypertension, arthritis and transmissible diseases such as hepatitis, HIV and tuberculosis. Unsurprisingly, those who have been incarcerated are more likely to have mental health problems. Former prisoners die by suicide at higher rates than the general public.

From Knowledge to Action

As we’ve seen throughout this series, almost all determinants are connected. While small programs that create small wins are important, the true solution will involve cohesive, macro-focused efforts between government, industry and community-based organizations. Recognizing health as more than the absence of disease and, rather, the sum of a person’s physical, social, economic, educational and family environment is the foundation of true whole person care—and a catalyst for the tools that make it possible.

This is part five in a five-part series taking a deeper look at each of the following social determinants of health. Explore other articles using the links below: