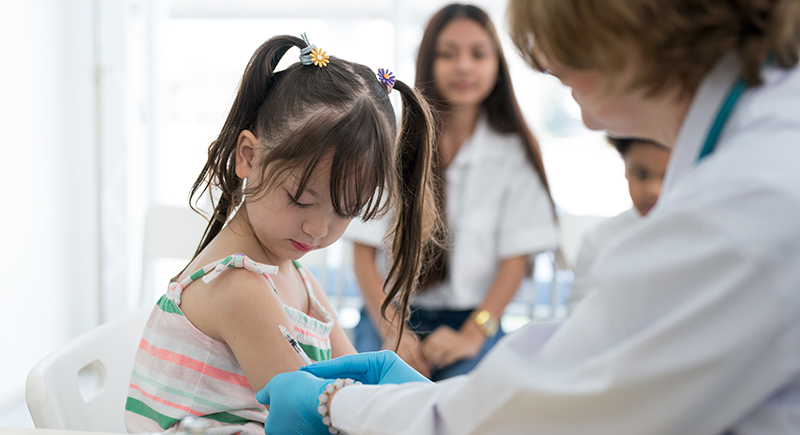 As we head into back-to-school season, it’s a good time to take another look at the tangle of issues currently affecting vaccination rates.

Kids are going back to school and engaging in social activities with fewer restrictions than they’ve had since the pandemic began. As of August 30, 2022, only Washington, D.C., has a student vaccination mandate (California’s is pending), and 20 states have legislation specifically banning them. Only five states plus Washington, D.C, have faculty COVID-19 vaccination mandates, and 14 states ban them.

But we don’t want to just talk about COVID-19 vaccinations (you’ve likely heard enough for a lifetime). The pandemic has had an enormous effect on all types of vaccinations, including those you very likely had as a kid — ones critical for the lifelong wellbeing of babies, toddlers and children.

UNICEF and The World Health Organization recently released data showing that we are currently seeing the largest number of children in three decades who don’t complete, or even start, their vaccinations.

The agencies expected to see a decline during the height of COVID-19 — lockdowns, closed doctor’s offices, fear of waiting rooms etc. — but they also expected to see a return to previous rates as the pandemic abates. That’s not happening. UNICEF Executive Director Catherine Russell said:

“This is a red alert for child health. We are witnessing the largest sustained drop in childhood immunization in a generation. The consequences will be measured in lives. While a pandemic hangover was expected last year as a result of COVID-19 disruptions and lockdowns, what we are seeing now is a continued decline. COVID-19 is not an excuse. We need immunization catch-ups for the missing millions or we will inevitably witness more outbreaks, more sick children and greater pressure on already strained health systems.”

The data in the report used full vaccination against diphtheria, tetanus and pertussis, known as DTP3, as a marker for overall coverage. DTP3 vaccinations dropped 5% between 2019 and 2021, to 81% (herd immunity requires 94% coverage). That means that there are now 25 million kids in the world at risk of contracting these deadly, preventable diseases.

Before there was a vaccine, measles infected just about everybody, and hundreds died each year. The U.S. declared measles extinct in 2000, yet, since 2015, there have been new cases and outbreaks. In 2019 alone, there were 1,249 cases and 22 outbreaks — the highest in 30 years.

In addition to the risk involved, there is a financial cost which further stretches our overburdened healthcare system. Care for and containment of each case of measles was about $140,000, representing hundreds of millions of dollars that didn’t need to be spent. Overall, we spend about $27 billion annually to treat adults for diseases that could have been prevented by immunization.

The overwhelming majority of scientists agree that vaccines are one of the most impactful medical advances of the last century.

Before we could immunize against polio, it would paralyze 10,000 children every year. Pertussis (whooping cough) killed 8,000. Rubella caused birth defects and mental disability in 20,000 newborns. The numbers tell the story:

The CDC estimates American children born between 1994 and 2013 who are fully vaccinated will avoid 322 million illnesses, 21 million hospitalizations and 732,000 deaths. During their lifetimes, that’s a savings of $295 billion in direct costs and $1.38 trillion in total costs to society.

There’s been a deep divide in our country over vaccines since long before COVID-19, though in recent years, that divide has become a chasm.

Since its invention, immunization has had its detractors, but the real problems we see today probably began with a fraudulent paper written by Andrew Wakefield and published in the Lancet. It suggested that the measles, mumps and rubella (MMR) vaccine caused autism in children. He was secretly being paid by anti-vaccine litigants in an anti-vaccine case and was stripped of his medical license. His conclusions have been disproven many, many times. The Lancet later wrote, “it was utterly clear, without any ambiguity at all, that the statements in the paper were utterly false.”

Besides the intentional spread of misinformation, there is, ironically, hesitancy born as a result of vaccines’ effectiveness. For example, when a parent doesn’t hear about a case of polio for 30 years, they think, “There’s no polio anymore; why should I give my kid this shot?” Because these diseases haven’t been seen for so long, parents often don’t realize how deadly they are.

The reality is: vaccines are safer than ever.

Vaccines are rigorously tested before FDA approval using clinical trials in animals, small groups of humans and, finally, large groups of humans. Immunization is so common that the data on adverse events comes from an enormous cohort and is thoroughly reliable.

Some parents worry about injecting their child with antigens. Antigens are any substance that causes the body to make an immune response against that substance. They include toxins, chemicals, bacteria and viruses. Immunization works by introducing antigens into the body to “train” the immune system to fight a disease when it is encountered for real. In 1980, protecting against seven diseases required 15,096 antigens to be put into a child. Chances are you had at least this many and you’re still here to read this. Today, we can protect a child against 16 diseases with only 173 antigens. That’s 99.99% fewer.

All medicines carry some risk, but with vaccines, the benefits far, far outweigh the risk to individuals, and to public health. All vaccines are continually monitored for safety by scientists, federal, state, and local health agencies, healthcare providers and the public. Systems are in place to coordinate this monitoring —  the Vaccine Safety Datalink Project and the Vaccine Adverse Event Reporting System (VAERS) are used in tandem to allow scientists to monitor vaccine safety. COVID-19 vaccines use these systems in addition to a program called V-Safe, which uses smartphones to add an additional layer of reporting.

There’s no quick fix to the current situation, and it’s going to involve a lot of players.

There must be cooperation and funding at county, state, local and federal levels in order to identify communities with low vaccination rates. Current immunization registries aren’t enough — reporting requirements vary wildly, data isn’t consistent, and systems don’t talk to each other. We need a standardized immunization solution that will finally realize the benefits of advanced, large-scale data analytics and interoperability. There’s movement in the right direction. The updated Cures 2.0 Act strengthens funding for the modernization of immunization tracking:

STRENGTHENING THE IMMUNIZATION INFORMATION SYSTEM — There are authorized to be appropriated to the Centers for Disease Control and Prevention $25,000,000 for each of fiscal years 2022 through 2024 for the purpose of strengthening immunization information systems. The amounts authorized by the preceding sentence are in addition to amounts otherwise available for such purpose.

Providers are the most trusted source of immunization information. They must be knowledgeable and armed with facts and materials in order to counter hesitancy. Schools need to be involved and check vaccine status and offer to fill gaps during well-child visits and back-to-school physicals. And, like providers, they need to be ready with tactics and facts to help parents understand the importance of immunizations.

Vaccines are health marvels that are starting to be squandered. If we don’t take action, we are inviting these heartbreaking, destructive and fatal diseases back into our communities. Let’s close the door again.